According to Lakoff and Johnson “Metaphor is pervasive in everyday life, not just in language but in thought and action.”(1980,”Metaphors We Live By”). Therefore, our ordinary conceptual system is fundamentally metaphorical in nature. Personally, I haven’t taken metaphoric expressions seriously in my life. However, I realize that a metaphor could impact a person’s thought and behavior through my personal experience.
For almost 8 months, I was actively engaged in Facebook. Eventually, I was invited to some exclusive clubs on Facebook. Among those clubs, I was more attached to the club, “The Village of Poets” which was composed of the members mostly from the same college that I attended in Korea. My nickname in the club was “Flower” Actually they call me “Flower” in a more polite way, using a poetic term because of the origin of my name. My name is Sooseon, which is a name of flower, Daffodil. Daffodil is literary translated into Sooseonwha in Korean. The word, “wha (花)” means flower. I wrote a short essay about my name on the wall posting of the club. Actually, I got my name from my father who passed away 4 years ago, and a special memory of him related to my name has been enshrined in my heart. 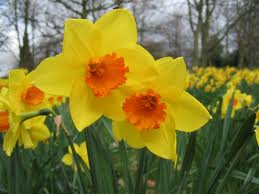 Since I explained to them what my name, Sooseon meant in the essay, they began to call me, “Flower” in a beautiful way. Some of them even told me that my image looked just like Daffodil. To be honest, I was happy to hear that. Mostly, I focused on the appearance of the flower, Daffodil at first, but I came to realize that the image of the flower became internalized inside me and had an influence on my identity. I noticed that I have changed the way I think, talk, and behave in my daily life. The metaphor, “Sooseon is flower” has transformed me in the positive way although it was shared within a small group of members, approximately 60 people on Facebook.
For example, whenever something upsets me, I find that I hardly express my frustration in a negative way and even I am not angry as often as I used to be. I talk to myself, “I’m a flower!", "A flower doesn’t shout at people." or "A flower should not act like this way.”
Some people may say, the metaphorical expressions: “You are what you eat!”,“You are what you think!”, “You are what you do!”, “You are what you wear!”, but I want to add by saying, “You are what you are called!” Among these mentioned above, the metaphor “You are what you are called really worked in my case. It proves that “all the aspects of our lives are fulfilled by metaphors and metaphorical concepts and our behavior is also framed in a metaphorical system.” (Lakoff & Johnson, 1980)

I hope I will live my life by the metaphor, “flower” and continuously spread the aroma of the flower, Daffodil, to others.
Here is a story about my name.
My Lovely Name, Sooseon
I got my name, “Sooseon” from my father. Actually, it is the name of a flower, “Daffodil”. That’s why my father picked the name for me. Most Korean names can be expressed in Chinese characters. So my name also has a meaning by using Chinese characters, which means “endless good”. Two other words have the same sound as my name, Sooseon. One word means “noisy”. The other one means “repair”. In my school days, some of my friends teased me by saying “You’re so noisy,” or, “You should be repaired like shoes, or bags, or something like that”. I still remember how embarrassed I was in math class just because of my name. We learned a new math term meaning a straight, vertical line; however, it sounded exactly like my name, “Sooseon”. All of a sudden, my classmates burst into laughter. My face just turned red.
I desperately wanted to baptize myself under a new name, something which seemed ordinary, so it functioned as nothing other than a name. Out of frustration, I widely complained to my father about not having the sense to give his child a good name. Whenever I begged him to change it, he always explained how beautiful my name was and ignored me. I sometimes cursed my name in secret and blamed my father’s indifference.
Since I have grown up, nobody around me has dared to make fun of my name. On the contrary, people have started to worship my name. For instance, “Wow, your name is so unique and easy to remember!”, “Who gave you that name? I think the person must have a good style.” Although I am not sure exactly when I began to be proud of my name and its many meanings, I can say I’ve refined and tempered myself due to the influence of my good name.
Because it also means “endless good”, I constantly make an effort to control my mind and be kind to others. This trait has made me peaceful and flexible. My name means “flower” as well and made me aware of how to keep in shape and not to excuse myself in terms of being attractive as a woman just because I am getting older. As I mentioned, it means being “noisy”, so I never make my life boring. I never neglect to try something new and don’t mind doing something risky to improve myself and to fulfill my personal destiny. Thanks to the meaning to “repair”, I sometimes take a quiet time to reflect on myself and examine my life to live at my full potential. And the meaning “straight vertical line” reminds me not to compromise with others just for the sake of convenience and not to be afraid of being against others if I don’t agree.
One more benefit of my name is that I could choose “Susan” as my American name without hesitation since it sounds very similar to my Korean name, “Sooseon”.
Now, I am relieved to think back that whenever I complained, my father persuaded me to think I have a special name instead of submitting a change-of-name form to the government. My father passed away four years ago. I regret that I didn’t have any chance to express how thankful I am to him for giving me such a wonderful name. My life will be the continuous process of proving my name’s worth, as it always has been.
Posted by susan daffodil at 5:59 AM